The family put a kitten, that was just born, to a nursing dog: the caring Doberman gave her all her love 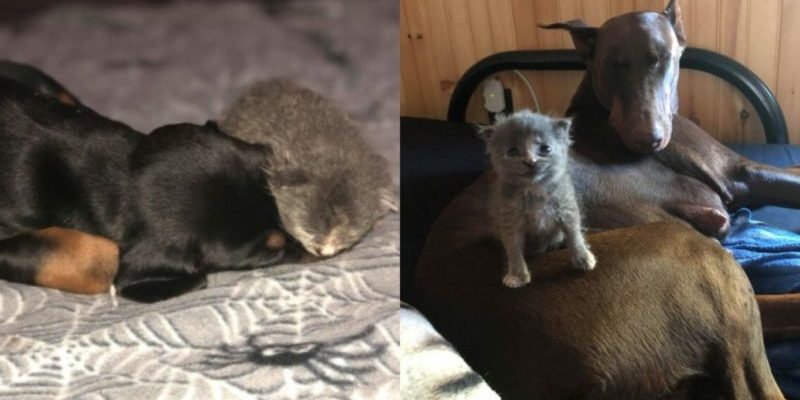 End of the summer for American Brittany Calan was hardsome as the woman helped her relatives with the house repair. Suddenly her attention cought a faint squeak from the garden. 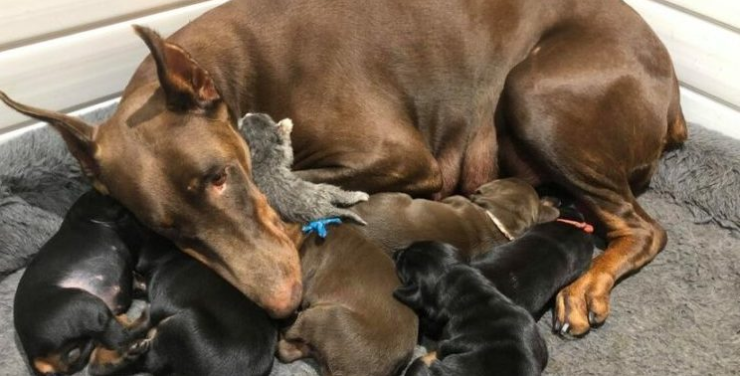 The woman followed the sound and found a little blind kitten. Judging by his appearance the kitty was just born. The woman didn’t touch tha baby as she thought that the mother had gone for some business and would come back surely.

The baby won’t stop crying over all day and even in the evening. So Brittany decided to visit the kitten again. The kiddo was still alone and was crying bitterly from hunger.

The woman was not able to leave him all alone on the street and decided to take him into the house. 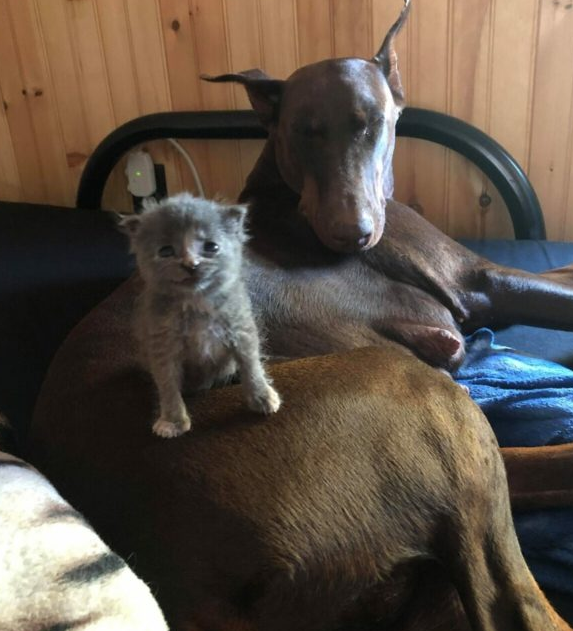 Ruby, Brittany’s dog, had just delivered her third little one and was just now nursing puppies and was just slightly older than the founding.

At first Brittany was a little afraid of the pet’s reaction. But the Doberman didn’t show any agression. She just started watching it at first and then sniffed and began to lick.

The woman became sure of the fact that her dog adopted the kitten when she gave the opportunity to eat. Ruby’s puppies also didn’t make any difference between their siblings and the newborn kitten. 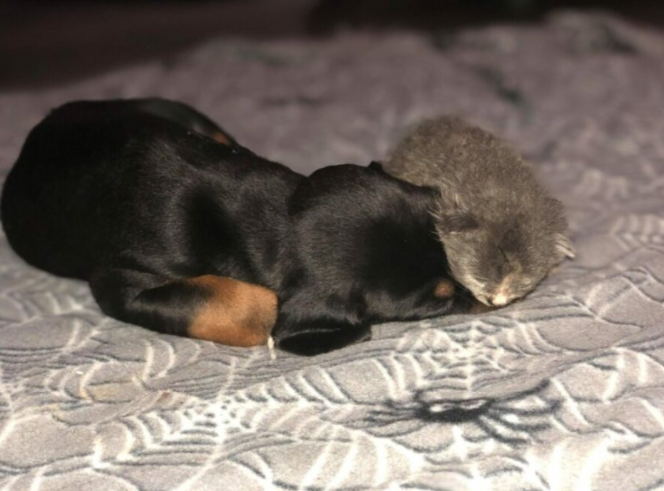 Ruby had already taken care for other species of animals for a couple of times. So there wasn’t any need to worry about the fate of baby Rose.

Brittany shared some cute photos of Rose and Ruby being together. As the baby cannot fed dog milk, more often she has to make nutritional mixtures.

At the same time Ruby is never bothered to give the litter one her attention and care as a real mother. The kitten falls asleep in a close circle of puppies.

ANIMALS
The cow hid her newborn calf in the forest: the farmers almost cried when they realized the reason for this
An Australian cow named Clarabelle lived for 8 years on a dairy farm when she suddenly began to lose milk and was sent to the slaughterhouse. She was lucky enough to be discovered by animal welfare officers
0 125

ANIMALS
A small dog waits every day for the visit of his beloved postman
It’s safe to say that no one waits for the arrival of a mail truck as much as this dog named Franny. All day this little sweet creature is focused on this and waiting for this moment.
0 110

ANIMALS
Cat with dreadlocks: social workers rescued a cat dragging meter-long strands behind him
This cat, named Heidi, lived with his owner in his own house for a long time. He was very unsociable and did not like to be caressed. He always hid in secluded places and only occasionally went out to eat or play.
0 78

The accountant went to the shelter for a dog that had no chance of getting in, and ended up taking 10 dogs and a pig
Anyone can create a mini-home shelter –
034